Finding the hits on eBay and a couple more TTMs!

You can buy pack after pack chasing the hits or you can just go on eBay and buy the hits. For less than the cost of a blaster box of whatever is on the shelves right now, I bought three autographed insert cards of some of my favorite Brewers. First up, a 2017 Topps Chrome Brett Phillips rookie card. Phillips was up and down between the majors and AAA this season, but it was his great play down the stretch after his September call up that endeared him to many Brewers fans. He has a cannon of an arm and I think he should change his uniform number to 80 next season to remind any opposing base runners of what they're up against. I took my son to his first ever game at Miller Park the day Phillips hit his first ever ML home run. Unfortunately, the Crew lost that game to the Phillies, but it was a memorable moment to see live. 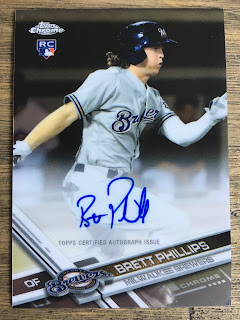 Next up, a 2005 Fleer Authentix Ben Sheets autographed game worn jersey card, #2 of 10. This one feels like quite the steal as there is another one of these on eBay right now for nearly 15x what I paid for it. There are different parallels of this card and I'm not exactly sure what the difference is between all of them, but for the price of a cup of coffee you better believe I'm one of 10 people in the world who would want to add this to their collection. 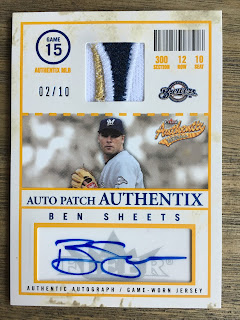 Finally, a 2004 Topps All-Time Fan Favorites Ben Oglivie. If you look at the top 10 leader boards for any of the Brewers all-time hitting records, you'll usually see Benji somewhere in there. He was a three time All-Star in Milwaukee and was the AL home run king with 41 in 1980. I'm a fan of the 1981 Topps set and the 2004 version with the sweet action shot looks much better than his card from the original 1981 set, pictured side by side here. 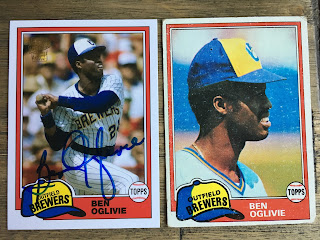 Two more former Brewers were kind enough to return some signed cards this past week. Greg Brock came to the Crew through a trade with the Dodgers before the 1987 season and he spent the last five years of his career in Milwaukee. Brock took over first base from Cecil Cooper in 1987 and hit .299 for Team Streak. 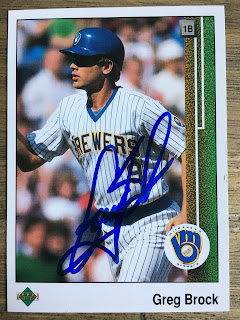 Bill Pulsipher only spent one and a half seasons with the Brewers in 1998-1999. His best moment in a Brewers uniform was a mid August 1998 game in which he struck out ten against a very good San Diego Padres team which went to the World Series later that year. 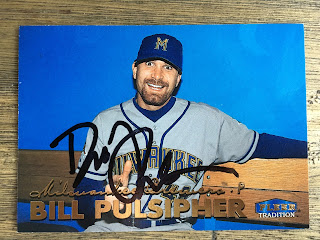