Since I started collecting cards again this summer and putting up this blog, I've arranged a few trades with some fellow bloggers. Each of these trades has gone off flawlessly and the generosity of the blogosphere is remarkable. None of these traders knew who I was when I contacted them and none of the trades were arranged "this for that," but they all sent over some amazing cards.  Honestly half the fun of trading over the internet is opening the packages and seeing what surprises are inside. It's quite a different world from when I traded cards with friends or schoolmates back in the 80's and 90's. Nothing was traded without scrutinizing the latest values from a Beckett price guide. I didn't know how the stock market worked, but I sure as hell knew how to read Beckett. That $3 Gregg Jefferies rookie card has a little arrow pointing up next to it, so you're going to have to throw in an extra Matt Nokes as a sweetener in order to get it.

Two recent trades I've made have been with Nachos Grande at the Fan of Reds blog and Nick at the Dimebox blog. I checked each of their want lists and found a few things I thought they would be interested in, mostly recent set needs. I did manage to dig up a Barry Larkin card that Nachos Grande didn't have, which is shocking because that Larkin collection is one of the most thorough player collections I've seen anybody assemble. For Nick, I scrounged up some Cubs I thought he'd like and a couple of Vlad Guerrero cards that I thought were kind of oddball, but I'm sure he already had. Here are some of the highlights that each of them sent me.

Nachos Grande comes up big with some 1982 Topps Brewers needs, Stormin' Gorman and Coop. Two of my favorites from the World Series team and two pretty good looking cards to boot. One thing that has always bugged me about the 82 set is Topps not using team colors for the borders. These would look so much better if the orange was replaced with yellow. 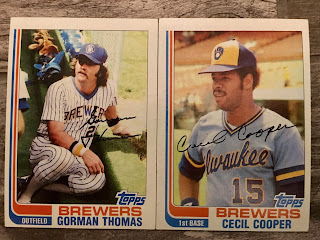 One of the standout cards that Nick sent is this 1976 SSPC Sixto Lezcano. I was only vaguely familiar with this set and now I want to track down the rest of the Brewers. The photography is great and I don't think anybody has ever looked cooler in a Brewers uniform than Lezcano does on this card. Check out the Jim Colburn card if you have the chance. He looks like he's getting ready for a match against Bruno Sammartino, rather than getting ready to pitch. 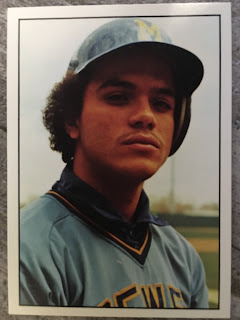 A couple of cool Rollie Fingers cards to add to the collection. This 1982 Kellogg's 3-D Super Stars card instantly became my favorite card of my very limited Fingers collection and the 2005 SP Legendary Cuts by Upper Deck is also very nice. I wasn't collecting in 2005, so this set is brand new to me. 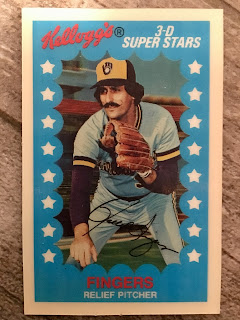 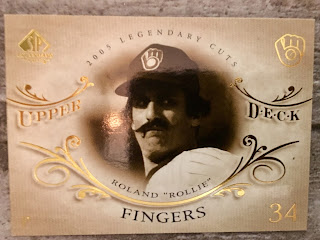 Some police department issued Brewers from the mid 2000's. I remember getting these sets as a kid in the 80's from the local police. I was playing ball in a field with some other kids once when a cop car pulled up. The officer called us over and we were scared out of our minds thinking we were about to be arrested for something (we were probably 9 or 10 years old at the time), but instead he handed us stacks of baseball cards. The cards back then were oversized, but the newer ones are standard 2 1/2" by 3 1/2". 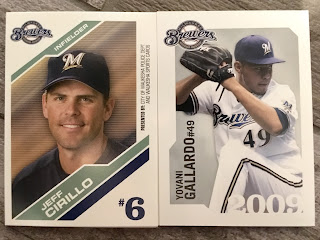 A couple Lewis Brinson rookie cards from this years Fire set and a 1987 style insert from this years Update set. Brinson has nothing left to prove in the minors and should make the team out of camp next spring. Every time I see a Brewers blogger dreaming up trades this off season, it usually is for Chris Archer and almost always includes Brinson going the other way. I think Archer would be a huge get for the Crew, but I also think Brinson is something special and a player you're going to want around for the next 6-8 years. 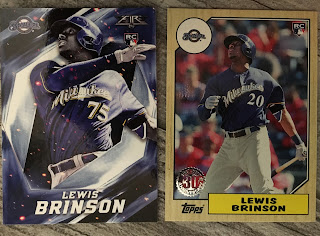 This is a really cool card, even if it's really hard to photograph well. The 2010 Topps Chrome #1 Prince Fielder, with the iconic photograph of the teams' home run celebration after Fielder's walk off against Barry Zito and the Giants the previous September. Baseball had a minor hissy fit about this celebration and Zito plunked Fielder in spring training the following year. I can only imagine what would have happened had Fielder also flipped his bat before starting his jog. 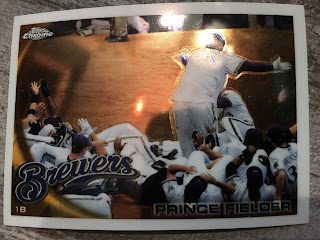 The last card I want to show is the 1996 Stadium Club Fernando Vina, if only for the great photo. I'm not sure who the catcher is giving Vina a knee to the beans while taking a forearm to the face before presumably getting knocked on his ass while Vina scores, but if anybody knows which game this is from, I'd love to know. UPDATE: Thanks to Laurens for leaving a comment on the post and directing me to this post at the Thorzul Will Rule blog. It's a deep dive into the photo on the Vina card. The catcher is none other than Hall of Famer Pudge Rodriguez. The game took place on June 14, 1995.  Here is the boxscore at Baseball Reference. Unfortunately Vina was out on the play as during a double steal along with Darryl Hamilton (DH taking second while FV took third), Vina got greedy and tried to take home, only to get thrown out. The Brewers did win the game though 4-2. 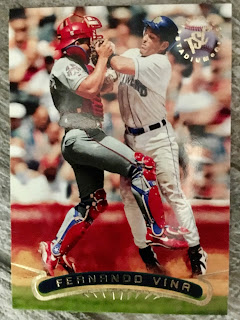 Thanks again to Nachos Grande and Nick for the trades.
at November 28, 2017