2017 Season wrap up, a TTM and some baseball lit

The MLB Playoffs begin tonight and unfortunately the Brewers won't be participating. Being the last team eliminated from the playoff hunt isn't much of a consolation prize, but I don't believe I am alone in thinking the 2018 team is going to be something special. Many of the young players took a big step forward this season and they still have plenty of room to grow (Travis Shaw, Corey Knebel, Chase Anderson, Jimmy Nelson, Domingo Santana, Orlando Arcia). We saw promising debuts from Josh Hader, Brett Phillips, Lewis Brinson and there are still tons of prospects knocking on the door. Bringing back Anthony Swarzak and Eric Sogard seems like a no brainer and I would not be sad if they opened the checkbook for Neil Walker. I'll be even happier if they open the checkbook for a starting pitcher. I don't expect the Brewers to sign a guy like Yu Darvish, but their name should be heard in rumors with guys like Tyler Chatwood, Lance Lynn and Alex Cobb. Let's get these playoffs over with so David Stearns can start wheelin' and dealin'.

When I got back into collecting earlier this year, I knew it was only a matter of time before I started chasing autographs through the mail again. I did this a ton as a kid, sending cards to players at their home stadiums. I remember seeing ads in the back of the trading magazines for autograph collector handbooks. $20 for a listing of players' home addresses. I never ordered one of these guides. At the time, $20 seemed a bit steep for a directory and it also seemed rude to me to be bothering these players at home for an autograph. Now all these addresses can be found on the internet and with other collectors sharing their success stories, you get a good idea who is nice about signing. I sent off a bunch of cards recently to some former Brewers and the first one just came back. 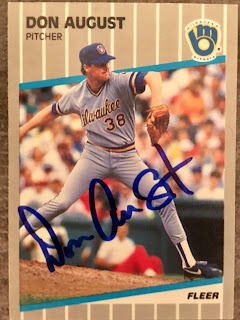 Don August had a four year MLB career from 1988-1991, all spent with the Brewers. His best season was his first, when he went 13-7 with a 3.09 ERA and came in fourth in that season's AL Rookie of the Year voting. He pitched six complete games that season. SIX! The Brewers only had one in 2017. Times have certainly changed. August was also a member of the 1984's USA silver medal winning Olympic team. His first card is in the 1985 Topps set. It's not as well remembered as the '85 McGwire that we all thought was going to be our retirement fund one day (again, how times have certainly changed). August still lives in the Milwaukee area and is a big Brewers supporter on Twitter (@DonAugust38). 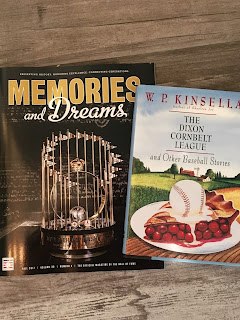 I added a couple new things to the reading pile as well. The newest issue of Memories and Dreams came today. It's the official magazine of the Baseball Hall of Fame and is one of the perks you get when you buy a membership into the Hall, which I did when I visited for the first time last year. I also picked up a copy of The Dixon Cornbelt League and Other Baseball Stories by W.P. Kinsella from the Little Free Library that's in my neighbor's front yard. This LFL has been a great source of baseball books. Earlier this year I found a copy of Jim Bouton's Ball Four and Chad Harbach's The Art of Fielding, which came onto my radar a few years ago when I found out the author is from my hometown. 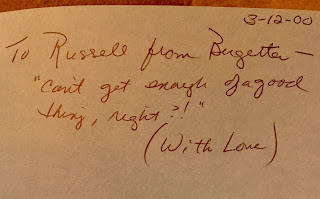 This inscription was inside the cover. I guess Russell decided he'd had enough of a good thing. Sorry Brigette.
at October 03, 2017