It's been awhile since I've posted anything here and I know better than to say I'll post more actively, but I am still collecting and I tend to stay more connected to the hobby through Twitter. Since my last post, I've continued to work on my Brewers set needs and have made significant progress thanks to some of the awesome traders out there - thanks to @mjpmke, @OffHiatusBBC, @JennyMiller521, and @SouthIndyCards for all the recent trades. For as little as I do post on here, I do make an effort to keep my want lists updated, so please reach out to me if you are interested in trading.

My job recently relocated to downtown Chicago, so I am no longer commuting to work by car, which means I am no longer driving past two different Target stores. I completely missed out on all the Bowman mania because of this and have yet to pick up any Series 2. Free time is a premium product in my life right now, but I'm sure I'll swing by a Target or maybe even the LCS to pick up some of the newer product soon.

The one thing that has been keeping my collection growing is the Topps Now brand. Ten different Brewers cards have been issued so far this season and I've picked up four of them. I think some of these cards get issued for the silliest of reasons, so I've been somewhat selective to which cards I have picked up. The first one was this Ryan Braun card issued on March 30 (print run 273) to commemorate his 3 run blast against the Padres that was part of the Crew's 5 run 9th inning rally to start the season 2-0. I stayed up late watching this game and Brewers Twitter was on fire that night! It was definitely one of the most fun games I've watched all season. 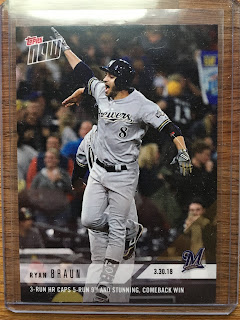 The Brewers actually had four Topps Now cards issued in the first week for various feats (Yelich's 5-for-5 game against the Padres, Braun and Yelich hitting back-to-back home runs to walk off the Cardinals and Arcia's walk off single to beat the Cubs). Jesus Aguilar would get a card on April 21 for his 13 pitch at bat that ended with a home run against the Marlins. I passed on all of these, but couldn't resist picking up the card issued on April 30 (print run 417) to commemorate Josh Hader becoming the first pitcher in MLB history to record 8 strikeouts in less than 3 innings pitched. 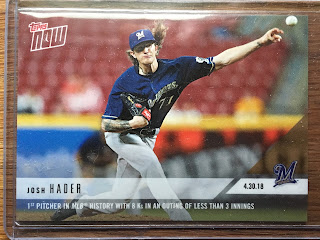 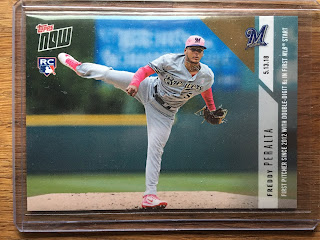 There was a card issued in late May for the Brewers best 50 game start in team history (31-19) that I passed on, but I jumped on the most recent card from June 22 (print run 199) for Jesus Aguilar's 2 HR night (first to break up a no-no and the second to walk off the Cardinals). The walk off has been my favorite moment of the season thus far and I only wish it had a small headshot in the corner 1984 Topps style showing the stunned look on Cardinal's manager Mike Matheny's face. I don't have the card in hand yet, but here is Matheny's sour mug. 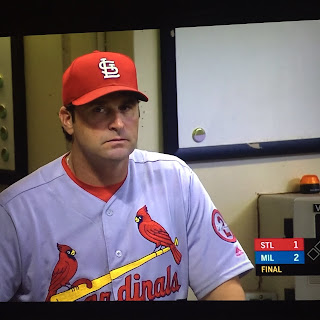 I also picked up the Topps Living Set card of Eric Sogard. I really like the 1953 design this set is based on and the Sogard art is well done. I was not alone in shock the day this card was issued as the last Brewers player I expected to get the Living Set treatment was Eric Sogard, who is desperately clinging to his 25th man roster spot at the moment. I had been anticipating a Brewers player getting added to this set for weeks and my money was on either Christian Yelich or Lorenzo Cain or perhaps a Hall of Famer like Robin Yount (all of whom I expect to get added to this set in the near future). 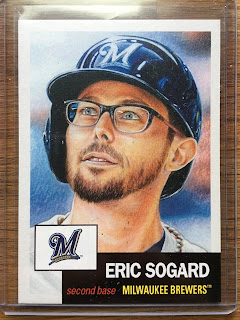 One thing that stuck out to me upon receiving this card is just how flimsy it is. The Topps Now cards are more or less the same card stock as the regular Topps base set cards. I thought the Living Set would be a little thicker like a Heritage or Archives issue or even something like a typical 80s era card. I've never held a real 1953 Topps card, so these things could be spot on with their reproduction for all I know. The Living Set has gained momentum with the collectors. The first card issued in the set was Aaron Judge with a print run of 13,256. Shohei Ohtani was close to 21,000, Gleyber Torres was 28,550 and Ronald Acuna was nearly 47,000. Collectors weren't as interested in Sogard, with only 4,690 being produced, but he isn't the most limited card out there as Nick Markakis' 2nd week issue was only 2,678.

I don't know if this on demand model is a trend of where the hobby is headed. I do enjoy picking up the occasional card, but I'm not sure this is how I want to buy all my cards in the future. I'll continue to pick up any Brewers issued in the Living Set and will pick and choose which Topps Now cards I get. At $10 a pop, things could get a little out of control if when the Brewers make the playoffs. That's probably the last thing I would complain about during a Brewers playoff run though.
at June 25, 2018 No comments: