I recently had the pleasure of trading with Matt at the Summer of '74 blog. Like me, Matt is a Brewers collector. His blog was actually an inspiration for me getting back into collecting. I’m amazed at his All-Time Brewers Project, where he is trying to collect a card of every player to ever appear in a game as a Brewer. He’s also trying to collect an autograph of every Brewer ever, which I am envious of. I noticed that I actually had a couple cards he needed for his project, so I emailed him to work out a trade. He was very gracious with his return package. He sent me complete Brewers team sets of 1988 Fleer, 1990 Bowman and 1991 Score. He also knocked off over 50 cards on my Brewers Topps needs list. Three particular cards were a highlight for me. 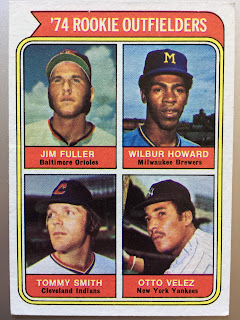 Getting a card from the ‘74 Topps set put a smile on my face immediately. Wilbur Howard’s career as a Brewers only lasted 16 games in 1973 when he hit .205 as a September call up. He did get a hit in his first Major League at-bat, a pinch hit single off Doc Medich late in a 15-1 drubbing by the Yankees. Howard was traded on March 30, 1974 to Houston for Larry Yount, the younger brother of Robin Yount. Larry is an interesting footnote in baseball history as he is the only MLB pitcher to appear in the official record books without ever actually facing a batter. In 1971, he was called on to pitch the ninth inning in a game against the Braves and injured his elbow during his warmup tosses. He had to leave the game without ever throwing a pitch. Yount never made it back to the majors after that. 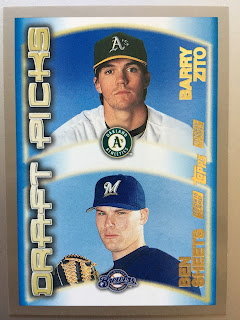 Sheets played eight of his ten seasons for the Brewers and for my money is the best right handed pitcher the team has ever had. He was a four time All-Star and holds the franchise record for most strikeouts in a single season, whiffing 264 in 2004. He struck out 18 batters in one nine inning game against the Braves that season. Sheets was the starting pitcher for the Team USA in the 2000 Olympics gold medal winning game, throwing a three hit shutout against Cuba.

Zito played fifteen seasons and was a three time All-Star, a Cy Young award winner and was apart of the 2012 World Champion Giants team. Overall, this is a pretty good duo to share a rookie card. 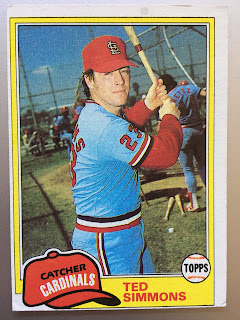 This is Simmons' last Topps card as a Cardinal. The Brewers acquired him in December 1980 along with Rollie Fingers and Pete Vuckovich for David Green, Dave LaPoint, Sixto Lezcano and Lary Sorensen. (Lezcano would eventually be traded to the Padres in the package that brought Ozzie Smith to the Cards.) Simmons was a two time All-Star for the Brewers in 1981 and 1983. Fingers won both the AL MVP and Cy Young award in 1981. Vuckovich won the AL Cy Young award in 1982. Without those three players on the team, the Brewers more than likely don’t make the playoffs in 1981, nor the World Series in 1982. The Cardinals did beat the Brewers in that 82 Series, so things worked out just fine for them.

Simmons is consistently one of the top names brought up when there are discussions about players overlooked for the Hall of Fame. He only got 3.7% of the votes when he became eligible for the Hall in 1994 and immediately fell off the ballot. This is a good article arguing his merits for induction.

Thanks again Matt for the cards!
at September 11, 2017 No comments: